This post was published 11 years 10 months 8 days ago. A number of changes have been made to the site since then, so please contact me if anything is broken or seems wrong. 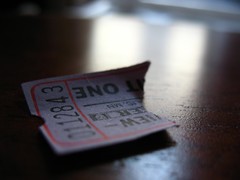 This morning, I had the dubious pleasure of waking myself at 08:00 to work a morning matinee of Jack and Rochelle. Not falling asleep until around 04:00 didn’t help things, but even getting just four hours of sleep would have been worth it if everything had gone as planned.

But as it happened, this morning’s show was canceled for insufficient audience.

OK, so Friday morning at 10:00 is kind of a strange time to have a show. The target audience is school groups, since most people are at either work or school; the only possible walk-up audience comes from seniors and other retirees. So these Friday shows are mainly targeted at groups of students.

Last Friday, there was a group scheduled from Project Success. They didn’t even see the full show; since opening night was last Saturday, there were some technical bits that hadn’t yet been worked out (like most of my projection slides). But there was an audience. There’s another group scheduled for next Friday.

However, this Friday was open; no group was scheduled. A few people walked up to the box office, but nowhere near enough to satisfy the management. Unfortunately, there’s a good chance that most of the dozen or so people that tried to see the show this morning will not come back at another time.

Now, losing ten customers to avoid dragging down cast morale with a nearly empty house isn’t really that big of a deal, I suppose. But all 21 of us in the cast and crew went out of our ways to be at the theatre for a morning show. I deprived myself of sleep (as it happened) and had to drag my mother along to drive me; others had to beg off of their jobs for the morning. Still others likely had to beg off of classes. I know that that’s “show biz” as they say, and such irritations are part of any job, but maybe there’s a better way.

It would save aggravation for everyone—cast, crew, and audience—if a few changes were made to the handling of these Friday morning matinées. Having nothing else to do this morning after the show was canceled, I brainstormed some ideas.

Changing policy to cancel Friday morning shows without confirmed group reservations would be the first step. The published performance schedule might indicate that Friday shows are subject to cancellation, with cancellation announcements going out by the preceding Thursday (at the latest, but ideally by Monday or Tuesday).

For notifications, it would be pretty trivial to set up a status page on the theatre website and a call-in status line with existing resources. 1It might be necessary to acquire an additional phone line for dedicated status use, but it could also be added to the existing box office number via an extension. The website could be handled with a free CMS, and a free PBX like Asterisk could handle the status line.

In the event that a show is canceled, a system of notifications to cast and crew would then go into action (as simple as telling everyone not to bother coming the next morning, if there’s a Thursday evening show, or as complex as automated calls—which Asterisk could handle). The status page and line would be updated with messages for audience members to check, and any patrons holding reserved tickets would also be notified by phone from the box office—either manually or automatically. 2The system would of course work better if cancellations occur with a few days’ advance warning, especially for the audience side.

Another way to handle it would be to take the opportunity for another run-through with the available walk-ups, 3Probably not the best solution for a show that’s already been running for a weekend or two or to offer those who were there (cast, crew, and walk-ups) a brief reception and social time for their trouble—maybe even a meet-the-director and discussion about the show. 4Refreshments would have to be kept available in the wings (so to speak) as a backup just in case the show is canceled, but the reception idea could be combined with the cancellation policy somehow to still offer audience members something in return for showing up, even if the show doesn’t run. That would in turn inspire interest and maybe even boost future attendance by word of mouth. In the long run, it would certainly be better PR than simply saying, “Thanks for coming, but we’ve canceled the show; come back next week.”

There is always room for improvement, of course, and I haven’t tried any of these ideas (since I haven’t had the reason to do so). But I believe the theories are sound, and it would certainly be better even to let cast and crew know the previous evening not to trouble themselves with showing up in the morning than to have everyone come for a show that ends up canceled.