Home Apple iPad? Of course I want one, but…

iPad? Of course I want one, but…

This post was published 11 years 11 months 22 days ago. A number of changes have been made to the site since then, so please contact me if anything is broken or seems wrong. 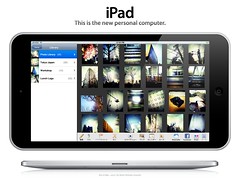 Technological progress can suck sometimes. I have wanted an iPod Touch for about a year and a half, to have the ability to play music and games while on the go as well as gain access to email, tasks, calendar, contacts, etc. while away from a computer (but near an open Wi-Fi network). I almost bought one last year, then I got wind of the upcoming third-generation models: more storage, etc. etc. So I waited. Then the Apple Tablet rumors really started in force, and I really don’t have that much spare change anyway, so I continued to wait.

And on Wednesday last—yesterday, that is—the bombshell dropped. Apple announced the iPad.

I got the news late in the day, so there wasn’t any point in trying to get out a quick post. There’s not even any point in posting about its technical specifications or features, since that information is well covered by Apple as well as others and is a mere search away. But I do want to say this: The iPad has very nearly stolen my desires away from the iPod Touch.

Why would I want an iPad anyway? The form factor appeals to me. I like its thin, light construction, and the fact that it’s completely mouseless; multi-touch interaction is definitely a win. The keyboard add-on would work to supplement the on-screen keyboard for more serious writing. Of course, there’s also the Wi-Fi.

Unfortunately, the iPad isn’t at all perfect, at least for what I would want to do with it. Like the iPod Touch and (save for the camera) the iPhone, it has no camera, no multi-tasking, no media card slots (so my 16GB SD card would stay in my camera), no USB, etc. So far as I know, it’s subject to all the limitations of the iPhone OS. But for some reason I still want one. Probably the same reason that I want(ed) an iPhone or iPod Touch. And Apple’s solution to the lack of ports? Adapters. Yeah. Not the best solution, in my opinion, and it’ll definitely keep me from seriously considering acting on this want. (Unlike so many others, I don’t really care about the name. I just think iPad is awfully similar to iPod.)

The lack of a camera is really strange to me. With such a sophisticated device, based on high-speed data communication over Wi-Fi and/or 3G, a user-facing camera (at least) would seem to be a natural feature especially since Apple’s laptops have included a built-in webcam for a while now. Videoconferencing on a device like the iPad could be really enjoyable, what with the accessories that would probably come out to make it even better. (I would like to see a stand that allows it to be used like one of those communication screens on Star Trek. Geek that I am. ;-))

As usual, Apple has created an incredible piece of hardware, but has omitted what I would consider to be key parts of a truly productive and useful platform. Just about every consumer electronic Apple produces seems to be focused on consuming media, whether music, video, images, or text. Their more conventional computers have productivity components, and can multitask like any Windows or Linux system out there, but they still excel at media consumption and production. This latest consumer electronic device is, to me, basically a Nokia N900 Internet Tablet with an App Store, no hardware keyboard, and Apple’s design flair.

Given the limitations, there’s no way I’m going to buy an iPad. It’s really a bummer. I’ll just have to contain that want, as I have been for the iPod Touch. Both devices are beautiful, amazing pieces of engineering (and it’s interesting to note Chris Messina’s hypothetical iPad Touch post from 2007, found on Twitter via @damon‘s timely tweet), but both are too limited and neither would really satisfy my want for a true portable computer. Too bad knowing the limitations of these Apple devices doesn’t in any way alleviate my geek lust for them. 😛