This post was published 12 years 6 months 21 days ago. A number of changes have been made to the site since then, so please contact me if anything is broken or seems wrong.

Fires show up on the news all the time, right? Right.

Fires happen in one’s neighborhood all the time, right? Uh, no…

I never thought I’d see it happen in my neighborhood. But today, it happened. It got me out of the shower, too. (Yes, my schedule is weird, and late. Don’t bother me. 😛 )

My mother just happened to look out the window. It was really a luck thing; otherwise, I would have missed the beginning part of it. I heard the sirens as I was getting into the shower, but sirens are common enough in this city that it wasn’t anything remarkable. The smoke (that I couldn’t see), however, was. I quickly cut my shower short and rushed to get dressed, grabbing my camera on the way outside.

Having my camera paid off, too; I got about two hundred shots of the scene, 132 of which I uploaded (after my mother helped de-duplicate and de-crappy-shot the set) a few hours ago. If you’re interested, have a look at my fire photos. I went through a battery-and-a-half in the approximately three hours that I was shooting. 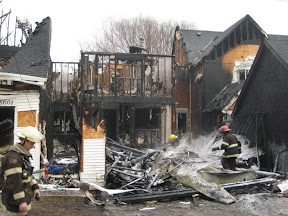 As you can see from the photo at right, the middle unit was practically gone. That tangled mass below the center fireman’s yellow helmet is the roof, which is covering a burned-out car. (The car’s gasoline tank—or it might have just been a tire, I’m not sure—actually exploded.

It was a pretty lucky fire, really. Nobody was home, and the two cats that lived in the fourth unit (I believe, though I’m not entirely clear) were rescued with no injuries.

Anyway, I don’t have to re-hash the whole thing; KARE-11 and the Star Tribune both have decent write-ups. It’s too soon to know very many details, so there are a lot of unanswered questions—like the cause. I’ll watch the news for more information.

Above all else, I feel like the fact that I was there taking pictures means I have an obligation to help those involved in any way I can. In the case of the owners, it means I’m offering the use of my photos for insurance claims and such. (Lia Peterson’s brother seemed appreciative of my offer, and I’ll ask him to pass on the link to his sister’s neighbors in my email to him. The cats rescued were Lia’s.) I’ve also emailed the City of Minneapolis offering my photos for use in the investigation that will be taking place.

Obviously I had no place trying to help fight the fire—I wouldn’t know what to do, and might end up getting myself or others hurt—so I ran around the three accessible sides of the property photographing all kinds of things, doing my best to stay out of the way of the firefighters and other officials. (Since nobody said anything, I’m guessing I succeeded.)

My mother also engaged a woman from Fire Station 17 in conversation, and I joined in. I gave this firefighter my photo gallery address, and also mentioned her in my missive to the City. She expressed interest in seeing my photos, but couldn’t give me her email address, so I’m doing my best to get them to her. (If I don’t get any indication that she’s gotten them, I’ll swing by the station at some point and ask.)

Those who weren’t involved with the FD did their best to stay out of the way, as I did. There were one or two instances where I saw neighbors helping out, though. The most shining example was when a new supply hose was being run from a hydrant on the next block. By-standers pitched in to drag the hose up to the engine in front of the building so it could pump water on the fire from above using its ladder. I would have done it in a heartbeat, if I’d been close enough, but it was good to see people helping out.

The fire is out, nobody got hurt, and the cats were rescued. But the work is really just starting. The light-weight construction of this relatively new complex meant that the fire spread a lot faster than it would have in the older buildings that are common in the neighborhood. In turn, that means there are several insurance claims to be filed, rather than one, and a full investigation will be made.

Lots of things need to be done. The residents need to recover what belongings they can and find shelter. The site needs to be cleaned up and (most likely) redeveloped. But the important thing is, nothing truly irreplaceable (such as life) was lost.