This post was published 13 years 5 months 6 days ago. A number of changes have been made to the site since then, so please contact me if anything is broken or seems wrong. 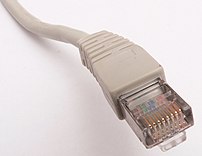 Image via Wikipedia All right, so obviously I managed to get online.  But it took about half an hour.  Let me begin the saga… (And this was after something of a disappointment at the NHSI Musical Theatre extension’s presentation… but I don’t think I’ll blog about that.)

We checked into the hotel around 22:00, then got up to the room.  I set up my computer and started looking for clues as to how the Internet access was delivered (RJ-45 plug or Wi-Fi).  I finally figured out that it was wireless (the amenities book gave the impression that it was wired) and tried to find it.  No luck.

So I called the front desk.  Duh.

Me: “I’m having trouble accessing the Internet.  Is it wired or wireless?”

DC: “Have you entered the code yet?”

DC: “On the authentication page.”

Me: “I haven’t even managed to find the network yet.”

Now she figures it out. (I am not dissing girls — there are plenty of geeky girls out there — it’s just that the guest services employees at hotels never seem to know anything about technology.) After a few more sentences, she gives up and transfers me to the Internet support call center.

One would think they’d know what’s up, right? By this point I’ve deduced that it was an out-of-range network, but I figured I’d see if the support tech knew something I didn’t. After getting in all my hotel info, I was asked what the problem was.

Me: “My computer can’t find the network.”

ST: “Is your connection wired or wireless?”

Me: *Rattles off the two that were in the list the last time I refreshed it*

Me: “The computer’s power cord is plugged in, yes.”

ST: “Can you reboot your computer for me?”

I waited on the line for a good chunk of time while my computer rebooted in its slow, cautious way. During the wait, I was asked what kind of computer I had. Foolishly I answered, “Windows XP”. I thought she meant the operating system, which is what most people mean when they ask “what kind” about a computer. But no, she wanted “Gateway”. Anyway…

And that was it. The tech suggested that it was a weak wireless signal in the room and said she’d have the front desk send up a bridge. (The bridge is pretty cool; it gets the ‘Net from the power socket. Nice!) And the call was over.

So, all they can do is send me something to plug in?  I like wireless Internet, thank you very much.  Oh well.

I’m not really complaining about the support tech; I know she’s just reading from a script.  The woman at the front desk should be able to figure out that if I can’t find the network, that means I haven’t gotten to the authentication page.  But maybe the average traveler isn’t too bright, and refers to the Internet as “the network”…  I don’t know.  I suppose my point is that the hotel’s wireless nodes aren’t placed too well.  And the last hotel we stayed at (same chain) had an Ethernet cable right on the desk.  Never mind the fact that I was bumped over to the table by my mother’s suitcase…

Travel is such fun sometimes…