This post was published 12 years 8 months 7 days ago. A number of changes have been made to the site since then, so please contact me if anything is broken or seems wrong.

Last night I got an invitation to try Yokway, a social sharing service that seems to focus on the sharing of useful information (in the form of links and info about music, restaurants, and movies). The invite came from Stephan Osmont, the site’s co-founder. Stephan’s email asked for my feedback, and this is how I’m providing it.

As part of the email conversation I had with Mr. Osmont while revising this review, I received this paragraph regarding Yokway’s purpose and mission, along with some general future plans:

Indeed, Yokway is about sharing useful information, and news articles are useful as well, it all depends on context. Yokway makes it easy for users to define their context in order to get the information they need daily. Today the context is defined by the people you want to follow, and the topics that interest you. We’re about to unveil location-based context, which will make a huge difference with users Yoking from portable devices. We have also a bunch of features to unveil soon, based on our powerful semantic engine doing some underlying magic to better tie everything together and fully contextualize the user experience.

It looks like a lot of stuff, far beyond what I cover here, is on its (Yok)way (er, yeah, that one was bad).

My personal first impression was of a FriendFeed with just the internal sharing feature. Of course, I compare most things to either FriendFeed or something from Google, so… Yeah. This initial impression was pretty inaccurate, and a bit into my discussion with Stephan I found a post about Yokway from Louis Gray — on Yokway, actually — who called it Digg for only your contacts’ submissions. You only share what you specifically share using either the Yokway site or its bookmarklet (though Mr. Osmont hinted at an auto-sharing feature in the works, for feeds like blogs or del.icio.us favorites; in fact, there are a ton of possible uses for such a feature, reducing the amount of manual re-sharing from site to site).

Also part of our conversation was my own initial confusion over the purpose of the site. I initially totally missed the mark (even further off than the FriendFeed comparison). I no longer remember what I thought it was for at the beginning, but suffice it to say it was really, really far off. Then I read the above-mentioned post by Louis Gray and had an epiphany, which helped me rewrite the review.

Mr. Osmont responded to my confusion with an acknowledgment (“We definitely haven’t spen[t] enough time explaining our positioning and we need to start taking care of this.”) and another future goal for Yokway (“Shows us how much we really need to start focusing on our message and positioning a bit more.”). Part of that future focus on message and positioning will likely be on the Twitter account he mentioned, @yokway. I’ve added it to my list; if you’re interested in Yokway, you should too.

During all the discussion, of course, I was busy trying out the site. I started with registration, then uploaded an avatar and tweaked my contacts. I also tried sharing something and checked out the reading interface.

On first registration, I was at first annoyed to see first- and last-name fields, but then tried my new trick of not filling in the last name box. It worked, and I got an account that simply displays Voyagerfan5761 as my name. Works for me. Point for Yokway.

Other than the names, the registration form asks for a username, password, and email address, pretty standard fare these days. There’s only one password field, though, so if you mess up and hit the registration button, you might have to guess or reset your password before you can safely log out again. For the unconfirmed password on registration, Yokway loses a point.

I then went into the settings panel (following the quick instructions provided in the invitation email) to upload my avatar, the standard blue logo I started using last month. Alarmingly the Last Name field (profile info is on the same page as picture uploading) was filled with that literal text, but cleared itself when I submitted the form. For a minute there I thought my name was going to end up being Voyagerfan5761 Last Name, but it didn’t. Point to Yokway for ignoring default values.

Then I checked My Contacts, which listed the site’s founder as my only contact. I unsubscribed and then searched for people, finding Louis Gray in there (he started using the site a few months ago, it looks like, and added me back soon after I subscribed to him — guess he’s still using it). I subscribed to Louis and went back to the homepage, where I saw a stream of shared items. The subscription functionality works without page reloads (take note, FriendFeed), and the people search box (for lack of a better term) seems pretty easy to use. Another point.

Here’s where we get into the meat of the site. Yokway says it “makes it easy to share things with the people you trust.” I trust most of the people I see on FriendFeed, and I’ve definitely seen Louis there, so he’s added. Other than him I know no other Yokway users. So we’ll stick with just the one person for now.

The sharing interface is pretty intuitive. All you have to do is click a button and up pops a dialog box. (Nice touch that it’s draggable, so if you want to read something under it, you don’t have to cancel sharing.) It starts with a Web search box, which you can change to Music, Books, Restaurants, and Movies. I’m going to try sharing my blog, this site, so I’ve typed in its URL. 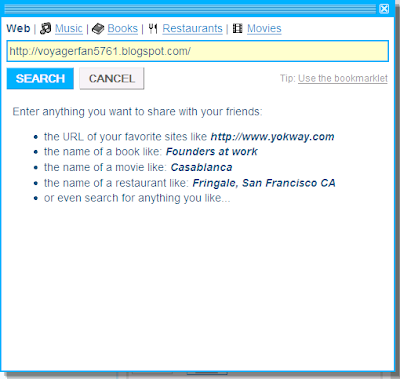 Now that Yokway has had a chance to search for it, we see the sharing page. Since there’s only one thing that matches this site’s URL, there is no list of results to bother with. We can enter a text comment, or record a video comment using Seesmic (very cool), then select a thumbnail image and optional description to accompany the site. I’ve scrolled the list of images to a capture of the first screen of the site, entered a message about testing as the comment, and added a dummy description. 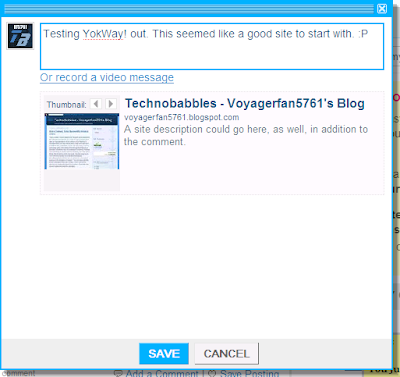 All that’s left is to share! Which means clicking the button. And then the page reloads (Yokway loses a point for this; all that JavaScript and this transition is still slowed by a full refresh) with the newly shared item. (Plus, presumably, anything else shared by contacts since the last page load.)

Of course, sharing things is no use if nobody reads them. Yokway follows the same sort of follower/following as Twitter, FriendFeed, and a lot of other sites. Digg has Fans and Friends. StumbleUpon has its own similar system. Reddit doesn’t have one that I know of, but maybe…

Anyway, Yokway displays all shared stuff from your contacts in a list on the home page. You have the ability to comment on and rate your contacts’ material, as mentioned above, and discussions can form on especially interesting stuff. This is like lots of other social sites, where there are items and comments. There’s even a great little summary widget that displays recent activity from your contacts:

Each item has a star rating (standard 1-5 like YouTube et al), an option to add a text or video comment (again, the video’s through Seesmic), and a link to save the item to your favorites (in Yokway, not browser bookmarks/favorites). Some are missing from the owner’s perspective (like saving), but interestingly owners can rate their own items. That shouldn’t be possible, in my opinion; only readers should be able to rate items, to give an impartial (presumably at least less partial than the owner) measurement of how useful and/or interesting the shared thing is. But perhaps Yokway is intended to let sharers indicate how useful/interesting the content is to them…

Here’s what things look like after other users (your subscribers) have had a chance to comment on and rate them: 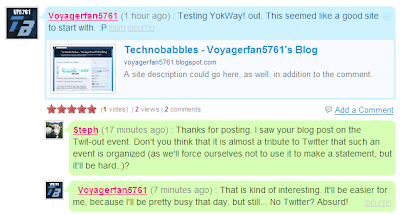 One nice thing is the fact that links open in a new window (or tab, depending on browser capabilities and settings) and so don’t complicate the on-page commenting and rating. No reloads are necessary for reading until and unless you want to update with new stuff, or if you share something yourself from the page you’re reading.

So the core functionality is all pretty easy to use, if slowed a bit by the page reload after sharing. Yokway seems to have been carefully developed for the most part, and I can see how it can be useful.

While probably not one of those sites I’ll make sure to visit every single day at the moment (that’s basically Twitter, Gmail, and Remember The Milk; core communication and task-management stuff), I’m still more likely to visit Yokway than I am Facebook, which currently is graced by my presence ( 😛 ) once every week or two. As it has been with Twitter and FriendFeed, and even Google Reader (with feeds instead of users), the more interesting people I find on Yokway, the more likely I’ll be to go there.

My visits will probably be a bit more for reading than for sharing my own stuff. I just don’t share things that often while I’m browsing. I use StumbleUpon to bookmark things (thinking about adding/switching to del.icio.us at present), and Digg and reddit to submit and vote on news & other interesting things. Sharing things on all the sites I have accounts with right now takes at least five minutes (unless it’s just on StumbleUpon, with the toolbar, which takes ten to sixty seconds, depending on whether I’m Discovering or just voting). But I have a feeling Yokway will turn out to be a useful tool for finding more interesting articles to read. Digg especially is overrun by crazies, idiots, and jerks anyway, and FriendFeed is getting really noisy.

Update (12:20): The thought of adding even more words to this review is unpleasant, considering how long it is already, but I think these are important points… I notice that there is a way to delete comments, but the link sometimes ends up floating off to the side, hidden among the sidebar items. More critically, there doesn’t seem to be a consistent way to get the URL of a specific item, unlike FriendFeed (Yokway seems to use the same hashing strategy to get identifiers). Finally, and most excitingly, I just noticed that Yokway uses jQuery! w00t!