This post was published 12 years 3 months 9 days ago. A number of changes have been made to the site since then, so please contact me if anything is broken or seems wrong.

I got back from Chicago late last night. The train was nearly 30 minutes early, but the delay in baggage handling made up for it; we waited about 20 minutes in front of the carousel before it even started turning. (It was made slightly better by the fact that we could see into the baggage room; the flaps on the carousel were pretty broken.)

All told, I think it was a pretty fun trip. There were only a couple things about it I didn’t particularly like.

The first thing I didn’t like was one of the pieces the Chicago Symphony Orchestra (CSO) played in the concert we went to Thursday night. It was some contemporary piece by a Korean composer named Unsuk Chin. I wasn’t the only one who found it, shall we say, unappealing. (Worse, she was there at the performance. Yipe!) No, I’m not a big fan of contemporary music. Of any kind.

The second thing I didn’t like was also a piece, this time in the violin recital I went to with our conductor and one other student — the recital option wasn’t very popular last year, either. That was a piece by a Finnish composer — name of Kaija Saariaho — written for solo violin. It was more contemporary music, composed in 1994 as a memorial tribute to Witold Lutoslawski (who passed away less than two weeks before the piece’s premiere — quite fast work). As I said, I’m not very fond of contemporary music.

Third came Verdi’s Requiem, which we went to as a group on Saturday night. Obviously Verdi isn’t a contemporary composer. It just wasn’t what I had been expecting, and it wasn’t particularly entertaining. It somehow reminded me of Gregorian chant, I think because the soloist(s) would sing a line and then be echoed in chorus and round by the choir. It was largely monotonous. However, I think that was the only concert I truly felt had been wasted time.

The fourth thing I didn’t like (wow, were there that many?) was sleeping on the floor. Well, it was perfectly comfortable. I wouldn’t exactly call it a dislike, since I slept relatively well, but coming home to my bed was nice. There would have been two of us on the floor, but a couple of my roommates were good enough friends (and small enough, as they were freshmen) to share a bed. I could have insisted on getting a bed at least one night — my birthday was Friday, hold the singing, please 😛 — but I hate kicking people out of their accommodations, and I was used to the floor by then.

Now why did I do the bad stuff first? On to what I enjoyed, immediately!

Aside from that second piece at the symphony concert, I enjoyed listening to Wagner’s Prelude and Libestod from Tristan und Isolde (which was slow, but still reasonably interesting) and Berlioz’ Symphonie fantastique, Op. 14. The Berlioz was the best part of that concert, in my opinion. And well it should have been — the concert was billed around that piece. 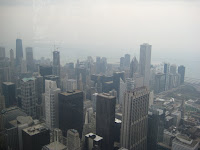 Friday morning saw a trip to the Sears Tower for breakfast and a walk around the Skydeck. I took some pictures up there, one of which can be seen to the right. Isn’t it a great view? (The rest of the pictures will have to wait a while; I’m running out of disk storage at the moment, and the card they’re on has gobs of free space.) There were also some displays up there (the Skydeck is on the Sears Tower’s 99th floor) including such notable personalities as L. Frank Baum (author of The Wizard of Oz), Dan Aykroyd and John Belushi (better known as The Blues Brothers), Studs Terkel (upon whose work the musical Working is based, and which I will be participating in late this Spring), and even Oprah Winfrey (whom I include here only because I’ve heard her name, not because I really care one way or the other). A lot of great stuff has happened in Chicago; I think there was even a film crew out while we were there (one of the other sightseeing groups mentioned something to that effect).

We played a concert at Navy Pier around noon. The wind ensemble played outside and got rained on, which meant their performance was cut short (I got only pictures of them, before it rained). Then we in the orchestra set up our performance inside the very noisy mall. I got a full recording of that, enlisting a chaperon to hold the recorder. As a result of that, there is some chatter in it, but mostly during the pauses, which means it can just be edited out when I get some software to do so.

Friday afternoon we (well, just a small group of us — around ten) toured a string instrument maker’s shop (William Harris Lee & Co.) and tried out a few of their hand-made instruments. They might even have a sale coming because of that; one of our group fell in love with the cello she tried. I grabbed a 1:40 sound bite of the room while people were playing (after I had done my own tryouts of violins), but I don’t think I’ll upload it right now. I have to do some thinking about what to do with those recordings.

Oh yeah, that reminds me that I really like the Roland EDIROL R-09. I think I’ll keep it. I also used it to record our concert at Navy Pier on Friday and the clinics Saturday morning. I’m just blown away by the sound quality of that little box. My only wishes right now are for sound-isolated headphones (to set input levels and monitor) and an external microphone (to reduce handling noise). A case would be useful, but is not a priority. (Priorities are actually the same as the order I used here: headphones, external mic, case.)

Friday afternoon was me studying lines in my room, then Friday evening was the violin recital I loved so much. It was at Ravinia Park, which meant a 45-minute train ride each way, but the performance (a certain Jessica Lee, violinist) was exemplary. The only thing I didn’t like was the contemporary piece. Well, and the half-mile walk in the rain — with no rain jacket — because we got off the train one stop too late. It was just the three of us: me, our conductor, and a flute-player. The rosin dust cloud at the last bow stroke was incredible!

Saturday morning was our own breakfast (like most of the meals on the trip) and the clinics. I recorded over two hours of 320 kbps MP3 audio footage that morning. There are 300 megabytes there, but I don’t know what to do with the recordings. If nothing else, they make good documentation. Maybe with some editing, I could turn out a CD-length copy of each one. Hmm…

Saturday afternoon was my downtime, spent reviewing recordings in the hotel room and watching a movie. I think it was 2 Fast 2 Furious, since the Wikipedia article’s plot summary matches what I watched. (The only word I could get out of the horizontally-squished, accelerated credits was “Furious”, so I had to do some sleuthing to figure it out.) Saturday evening was the pretty-boring — but still technically impressive — Requiem concert (which included recognition of the Midwest Young Artists’ graduating class for this year), followed by a short hang-out in the floor lobby at the hotel before the rest of the group got kicked out around midnight by a burly security guard.

Sunday morning was a good sleep-in and then packing. I’d packed Saturday night, so I didn’t have much to do. It was, for me, just getting up, getting dressed, and tidying up my stuff. We checked out around 11:00 and took our shuttle to Union Station, where we got lunch and boarded the train.

The rest of the trip was either sleeping or train rides, neither of which were particularly interesting.

A few memorable things happened. First was the accident on the Red Line, in which a semi crashed into an elevated-train station. Some of our group were in the area at the time and were evacuated from the train they were on, getting redirected to bus transit.

Second was the rain on the way to Ravinia. I mentioned this above, but I’ll go into more detail here. We got off the Metra train one stop too far and had to walk back to Ravinia Park for the recital on Friday night. It was raining pretty hard, and the trip was a bit longer than we’d anticipated. The only one of us with a rain jacket was, of course, our conductor. By the time we got to the recital, we were sufficiently damp. On the way back we got smart and took the train from the nearer station.

Third, after the White Sox game was rained out (also Friday night), some of our group got into a pull-up contest with some Chicago teens (14-16) and won a hip-hop CD. They played it in our floor lobby later that evening. I’m not much for hip-hop, but at least some of the lyrics were reasonable.

So that about wraps up the trip. I think it was worth the time. Now I just have to get used to
my school stuff again. Oh, those five days were bliss…