This post was published 13 years 9 months 24 days ago. A number of changes have been made to the site since then, so please contact me if anything is broken or seems wrong.

I’m not talking about handing over copyright certificates to publications produced by the search giant. It would be cool if us little people, Google’s loyal users, could get a piece of their intellectual property, but no. I’m talking about making someone else the owner of a Google Document you created.

Google Docs has had sharing built into it since I started using it many moons ago. However, the owner of the document has always remained static until now. I just noticed late yesterday (read: too late to blog about it) that the “Change Owner” option Ionut discovered (look below the screenshots) a couple days ago. I didn’t see it then, but I see it now!

So, where is this mysterious option? I had to actually do some digging to find it. It’s not in the sharing menu, or any of the other menus available when the document is open (that I could see). It’s only available in the context (right-click, but you knew that 😉 and More Actions menus on the main Docs screen: 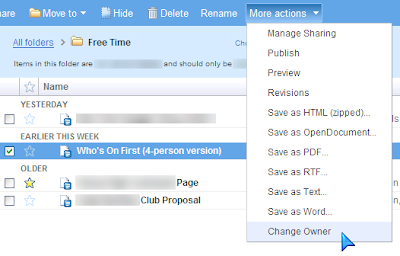 It’s at the end of both menus (which are copies of each other, so consistency is expected). Kind of hidden, which is probably OK because not a huge number of people will have need of the feature. I do see how it could be useful, say, if you start a document and then delegate it to someone else, and further collaboration from you is unlikely. No sense having it still in your list. The other person can take over responsibility for the Doc. Transfer it.

Niche feature, niche product; but that’s OK. Microsoft Office has been packing niche features, dozens of them, for years, and the numbers keep growing. Now if only Google would implement that nice paged layout we saw on Google Blogoscoped a little while back (scroll down to “A Newer Google Docs” – the post is about a whole presentation Google made)…