This post was published 13 years 11 months ago. A number of changes have been made to the site since then, so please contact me if anything is broken or seems wrong.

Ionut Alex Chitu (Google Operating System) and Philipp Lenssen (Google Blogscoped) seem to agree with each other that Google Docs needs improvement. However, there are differences in the ways they each approach that improvement.

For example, Ionut thinks Google should stop adding features and concentrate on improving the ones that are already there. Philipp — if I’m reading his post correctly — has an idea for “feature gadgets” — menu items scripted via a Docs API that can access selection, whole document, etc. and modify it in a way that implements an advanced feature that most people wouldn’t use. Unlike Microsoft Office, which includes every imaginable feature, Philipp’s idea keeps menu clutter to a minimum, giving people their own useful features without making everyone see them.

I like that idea a lot, and I think these screenshots (taken from Google Blogoscoped’s post under CC-BY-NC) illustrate pretty much a change I’d agree with: 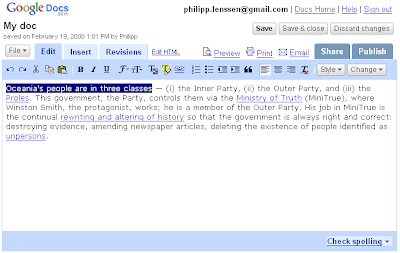 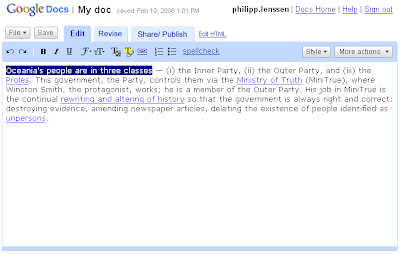 I don’t particularly agree with the tab changes (“Revisions” renamed to “Revise” and “Share” combined with “Publish”, especially since “Revise” is far too similar to “Edit”), but I like the overall idea of the gadget menu.